Every economy has three potential sources of growth:

For a number of years, ‘innovation’ has been the European Union’s new “mantra”. Latvia has fully adopted the idea of setting innovation programmes as the supreme goal of economic policy, as confirmed by the National Development Plan. As a result, insufficient attention has been paid to other means of encouraging growth, and in particular to one of the conditions most specifically important to Latvia, i.e. capital accumulation.

In the realm of global technology, the majority of Latvia’s enterprises are not considered to be direct competitors to American companies or those from other European Union member states. 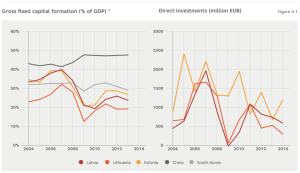 Instead, the challenge facing Latvian industry is to learn to produce products which more developed countries have invented and are already manufacturing, and to move further up the complexity ladder of such products. Investment in physical capital is a significant element of this process. Investment in Latvia reached a peak in 2007 and then fell sharply to 19% of GDP in 2010, before rising again to 25% of GDP in 2012. However, in 2013 and 2014, there was a significant reduction in the volume of investment. For the last three years, the volume of foreign direct investment has continued to fall.

In Figure 4.2, information is collated about the total volume of investments in Latvia, as well as the balances of bank loans issued to businesses.  In  the majority of the sectors reviewed, there has been a reduction in the volume of issued loans. The only exceptions to this trend  worth mentioning are the power, gas and water supply sectors, in which the balance of issued loans has actually increased, compared with the corresponding level in 2007-2008, as well as the agriculture, forestry and fisheries sectors, where the volume of lending has remained quite stable during the past decade.  With the exception of these sectors, we are left to conclude that lending trends are quite unfavourable. 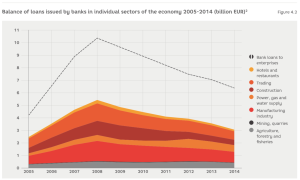 The situation is contradictory. Banks have the financial resources, interest rates are at an all-time low, but banks’ loan portfolios are contracting. 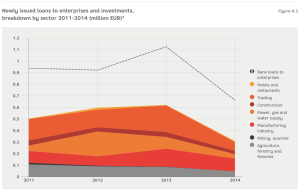 This study uses three instruments to study bank lending in Latvia. First, an exclusive data-set developed by Vjačeslavs Dombrovskis and colleagues at the Stockholm School of Economics in Riga’s TeliaSonera Institute between 2008-2011. This survey of innovative business in Latvia (SIBiL) tracks the development of over 1,200 small and medium-sized enterprises in the (SME) manufacturing sector from 2008 to 2015 . Secondly, in-depth interviews with board members of Latvia’s four biggest banks. Thirdly, case-study analysis of the experience of the timber industry. 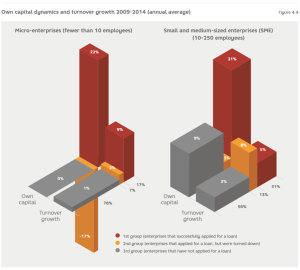 During discussions with bank representatives, a range of broader problems which banks and businesses encounter were identified: 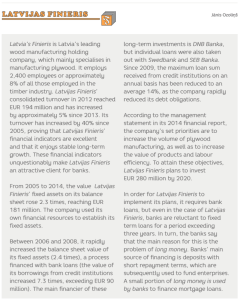 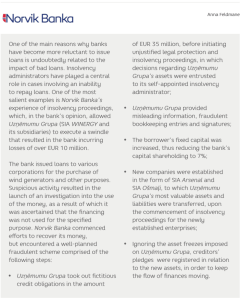 The problem of the availability of credit mainly exists in relation to financing the investments of small and medium-sized enterprises. The main reasons are: the activities of enterprises related to the shadow economy (which reduces the credibility of financial data), the excessive likelihood of the non-repayment of debt obligations (using insolvency proceedings) and torturously slow and inefficient recovery of bad loans (slow review of cases in court).

There is little likelihood that significant and rapid progress will be made in the area of combating the shadow economy or in the legal realm. Therefore, the focus should be on solutions that can be implemented in practice during the next two years and which will improve the availability of funding for enterprises. We propose three courses of action.

Use of reinvested profits by SMEs

The use of operating profits for investment can serve to improve the competitiveness of a business,  thus enabling it to achieve better long-term results. At present, in Latvia, several corporate income tax incentives are in place that indirectly stimulate an improvement in the enterprise’s efficiency, but some of these are primarily geared towards bigger enterprises.

SMEs, and micro-enterprises in particular, have problems with access to financing. Evidently, the most frequently used source of financing is an enterprise’s own profits. The state can stimulate investment by not imposing corporate income tax (CIT) on profits reinvested by micro-enterprises and small and medium-sized enterprises.

In Estonia, this system has successfully operated for a decade and a half. The 2000 law is easy to understand and administer. Reinvested profits are subject to a 0% corporate income tax rate. After the introduction of the 0% rate, there has been a rapid increase in the amount of corporate income tax collected – rising from 0.72% of GDP in 2001 to 1.78% of GDP 2004.4 Waiving CIT on profits reinvested by small and medium-sized enterprises will improve access to bank loans, because enterprises will no longer be motivated to manipulate the declaration of profits, in order to avoid payment of taxes.

In Latvia, this problem is particularly relevant for small enterprises, due to the CIT advance calculation model. Declaration of profits will improve the quality and credibility of reports and thus improve access to bank loans. In Latvia, there is a belief that the current benefits to those enterprises, which invest in fixed assets, are sufficient to stimulate investments. A speeded-up system of writing off manufacturing equipment, using a ratio of 1.5 (this provision in the existing law is due to be in place until 2020), is already in place. However, this system helps those enterprises, which already have access to investment funding. An accelerated depreciation system does not reduce the motivation not to declare profits to avoid paying taxes.

Not taxing reinvested profits with corporate income tax could resolve the problem of limited access to investment financing faced by SMEs. The solution would be to apply this break to small and medium-sized enterprises, concurrently retaining the available corporate income tax breaks for larger investments. This approach would be fiscally neutral, even increasing government revenue in the medium term.

Financing via the stock market

An enterprise can also attract resources via the stock market, e.g. by issuing shares and bonds. By issuing publicly traded shares, the enterprise concurrently undertakes to publish detailed operating reports, in accordance with  the legislation currently in force.  To date, there have only been isolated instances of

Latvian businesses attracting financing by issuing shares on the stock market.  One example worth mentioning is the emission of shares by SAF Tehnika in 2004.

An enterprise can also issue publicly traded bonds. Some Latvian enterprises have implemented this procedure successfully. In recent times, the most prominent example is Latvenergo, which has attracted funding worth EUR 180 million in this manner. The biggest volume of bonds, worth over EUR 640 million, has been issued by ABLV Bank. Bonds have also been issued by other banks such as Rietumu Bank, Baltic International Bank, as well as enterprises related to the pay-day loan sector. Bond issues are not common practice, because the related costs are quite high.

Attracting financing via the stock market is common practice in the United States and in other countries with developed stock markets. In recent years, steps have been taken in the European Union to encourage more active use of securities. For example, at the end of 2014, the European Central Bank launched a programme, under the auspices of which asset-backed securities are bought with the objective of diversifying sources of bank funds and stimulating the issue of new securities.5 This is an opportunity to stimulate the provision of credit to Latvia’s small and medium-sized enterprises.

In order to implement this, the so-called securitisation is used. Securitisation can take place in relation to a set credit portfolio, which the lender sells on to a specially established corporation that in turn, issues securities, which it sells to investors.6 Ordinarily, loans of a homogenous nature are chosen that make it easier to assess risk more accurately. As a result of securitisation, the issuer (emitter) of the securities attracts capital and gains a greater ability to obtain new loans. The credit risk as a result of this activity is passed to investors.

The availability of loans is also hindered by the lack of trust among lenders who believe that borrowers have opportunities not to repay debts, e.g. by means of insolvency proceedings. Moreover, the review of cases in courts is very slow.  In recent years, Latvia’s commercial banks have tried to optimise their operations in Latvia’s regions, centralising decision-making. However, there is a solution that could ensure greater trust in borrowers among lenders. This is a regional savings and loan association model.

In many countries, savings and loan associations  form an alternative network providing payment and financial services, based on the principles of collaboration and providing services that are important to the members of these companies. Usually, these have been formed as an alternative to the banking sector, but, over the course of time, in a number of countries they have secured an important place in the country’s financial system. For example, in the USA and Canada up to 40-50% of economically active citizens are members of savings and loan associations.7

1) It would be much more difficult for borrowers in the regions to defraud savings and loan members, who are often their domestic or foreign neighbours;

2) When it comes to making a decision about whether or not to issue a loan, a savings and loan association is not only more likely to have a clearer impression of the borrower’s  financial situation, but will probably also be knowledgeable vis-à-vis the specifics of commercial activity and development in the region in question.

The regulation of savings and loan associations is usually quite flexible, meaning that it is possible to establish them in cities or towns, or even among certain interest groups. For example, exiled Latvians formed several savings and loan associations in the United States and Canada after the Second World War, stimulating the circulation of money within the community.8

According to FCMC data, there were 32 saving and loan companies operating in Latvia at the end of the 1st quarter of 2015.9  Their total volume of assets and issued loans is negligible compared with other market players. The volume of assets held by savings and loan associations in Latvia at the end of the 2nd quarter of 2015 was EUR 24 million,  while the volume of issued loans was only EUR 17.2 million. In comparison, in percentage terms, this is less than 0.1% of the total bank assets, which exceeded EUR 30 billion in 2015.

In Estonia and Lithuania, the development paths of savings and loan associations has varied. In Estonia, although there are over 20 savings and loan associations, their total volume of assets is small. In the middle of 2015, it amounted to slightly more than EUR 45 million. In recent years, the growth in the volume of assets has been quite rapid, but the distribution and significance of these associations in Estonia is small when compared with total bank assets (EUR 22 billion in the middle of 2015).

Profits reinvested by SMEs should not be subject to corporate income tax, retaining the existing accelerated depreciation model for large enterprises

Issue of asset-backed securities on the basis of SME loan portfolios:

Facilitate the development of savings and loans associations and their involvement in micro-lending in Latvia’s regions, involving municipalities and attracting financing from  European Funds.

3 Moreover, when companies were asked whether they had recently experienced a situation in which they required credit, but they did not apply for one, because they were concerned that the bank would reject their application, only 12% of SMEs, which did not apply for a loan, replied in the affirmative. The most affirmative answers to this question were made by micro-enterprises (17%). Bearing in mind the aforementioned factors, one can contend that 49% of all SIBiL SME respondents and 63% of the micro-enterprises surveyed were not interested in bank loans.

10 Distribution calculated by dividing the number of members of savings and loan associations by the number of economically active citizens aged from 15 to 64 years.