Latvia’s strategic geographic location, large ports and region leading banks make it an important trading hub between markets in Europe and the East. In 2013, Latvia’s ports handled as much cargo as Estonia and Lithuania’s ports together (see Infographic 6.1).1 At the same time, Latvia’s financial services and banking sector has become a significant segment of Latvia’s economy with high added value. In 2014, the banking sector generated 2.44% of GDP (EUR 585.9 million) with 2.81% of added value for the economy. It employed approximately 9,400 people.2

The strategic and harmonious development of trading infrastructure and banks, with the objective of turning Latvia into a trade hub, could encourage a growing number of small and medium-sized trading enterprises (SMEs) to relocate to Latvia, which in turn, would offer both sectors the prospect of growths. A 2012 report by KPMG on international freight trading companies showed that trading enterprises choose their location, based on developed financial services infrastructures and strategic proximity to the market (Latvia satisfies both of these requirements), as well as investment-friendly government policy and tax rates (this is an area in which Latvia could well improve its competitiveness).4

Rotterdam in the Netherlands is the world’s eleventh biggest port and serves as an important entrance and departure point within the continental European market. The Dutch Government has laid down a unique business model – trust services for international enterprises that allow them to optimise their tax burden and preserve their competitiveness. This model induces large importers and exporters to set up special holding companies based in the Netherlands that structure transactions and are run by professional services in close collaboration with legislative, taxation, legal and banking systems.

Despite having a population of just over five million people, Singapore is the world’s busiest port in terms of transported tonnage. It enjoys a  major benefit in the form of the day to day use of English and Chinese, which opens up the Indian, Chinese and Western markets. Its trade hub model is based on a labour force policy that stipulates tax-free personal income status for non-resident traders and non-resident intermediaries. At the same time, residents whose movements involve international travel, can further reduce their tax burden below the already low 20% maximum income tax rate.5

Latvia has the opportunity to attract trading companies and to induce them to relocate to Latvia by implementing the Dutch trust service model and reforming its basic tax policy for foreign business owners. Latvia already possesses the main components required for the development  of these sectors, i.e. large ports, logistics services and developed banks and financial services companies. 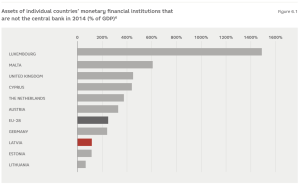 Latvia has marked competitive advantages, compared to its neighbours, in the form of busier ports and growing banks that currently already attract 78% of all international investments that flow through the region. In December 2014, the ratio of the assets of Latvia’s banks in relation to GDP was 117%, compared with Estonia (112%) and Lithuania (63%).7 However, compared with the EU-28 average indicator of 246% of GDP in 2014, it is evident that Latvia is in a position to significantly expand its banking service offering for international clients. Latvian banks are also well-capitalized (considerably above the Basel III 8% requirement) and highly liquid.

Latvia’s international banks already serve SMEs, whose owners are usually from CIS countries, as well as high net worth individuals that usually manage such businesses. These international banks make up the fastest growing sector of the Latvian banking industry. In addition to deposits, they offer payment and card services, loans, property management, brokerage and trading financing. In 2014, international banks  in Latvia generated 1.34% of added value, corresponding to 1.17% of Latvia’s GDP and approximately EUR 65 million of tax payments.8 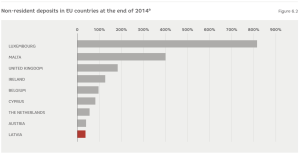 As of 30 June 2015, non-resident deposits in Latvia’s banks amounted to EUR 11.4 billion, while the deposits of residents came to EUR 10.9 billion.10  International deposits are usually not used for local loan operations for various reasons including currency and term non-compatibility and difficulties in issuing loans in a foreign jurisdiction. These deposits are used for liquid investments. As a result, the liquidity ratio of international banks is approximately 80%, which is well above the minimum stipulated under legislation (30%).

Accordingly, Latvia’s port and banking sectors are suitable for encouraging the future development of a trade hub. In order to persuade enterprises to relocate to Latvia, banks must attract their existing business clients, offering an attractive package of services and incentives. A recently conducted survey of 30 non-resident banking clients, regarding their commercial operations and readiness to relocate to Latvia, produced some interesting results. The average turnover of these clients was $57 million while 11% of their sales volume was in EU countries. Overall, the respondents conceded that they would consider relocating to Latvia if the corporate income tax rate was 5%, and would also be prepared to relocate about four employees to Latvia.11

Latvia already has laws that provide a stable platform on which to further develop the operation of trade hubs. The Law on Joint Stock Companies permits the division of tax-free dividends to enterprises, as well as entitling foreign citizens to hold the office of managing director of a joint stock company.12

Other legislation could further strengthen Latvia’s status as a trading centre. Various types of financial instruments could be developed, e.g. tax breaks or other types of support, which, of course, must comply with EU State support regulations. Lithuania’s INVEST-LT+ programme has successfully developed a corporate back office processing operation offering (provided by  Barclays Bank and Western Union), providing large companies that move to Lithuania various forms of financial support and incentives.13

Certain tax benefits could be established for enterprises that relocate to Latvia, based on the experience of Singapore. Firstly, companies that relocate to Latvia for at least five years, and whose operations involve significant trade outside the EU, could be permitted to exclude income obtained from trading outside the EU in their Latvian corporate income tax calculation, with a tax threshold of 2% of total taxable income. Latvian citizens employed by such enterprises should be paid salaries that are at least twice the Latvian average wage.14

Secondly, enterprises that are currently registered in another country and considering moving to Latvia and whose turnover is less than EUR 50 million, could be offered a two year corporate income tax holiday up to EUR 200,000. In this instance too, the enterprise would have to agree to register in Latvia and operate here for at least five years, as well as to employ Latvian citizens, paying them salaries that are at least twice the Latvian average wage.

The relocation to Latvia of foreign businesses could also be encouraged by waiving their social security contribution pension shares for a period of up to five years. The State Revenue Service should support international enterprises relocating to Latvia by both conducting official communication and accepting reports in English. The growing number of trading companies would precipitate demand for a larger product and service offering to provide banking functions in the realm of the management of private funds.

Recommendation 1 – TAX BREAKS FOR COMMERCIAL OPERATING ACTIVITIES OUTSIDE THE EU

Businesses that relocate to Latvia for at least five years, establish a company in Latvia and whose operations involve significant trade outside the EU, should be permitted not to include income obtained from trading outside the EU in their Latvian corporate income tax calculation up to a tax threshold of 2% of total taxable income.

Small and medium-sized enterprises that are currently registered in another country and are considering relocating to Latvia (by establishing a subsidiary in Latvia) and whose turnover is up to EUR 50 million annually, could be offered a two year corporate income tax holiday up to EUR 200,000. In this case, the enterprise would have to undertake to register in Latvia, be based here for at least five years, and employ at least two local employees for at least five years, offering a remuneration that is at least twice the Latvian average.

Foreign businesses starting-up in Latvia should have their social insurance deposit pension shares waived for a period of up five years.

The State Revenue Service should support international enterprises relocating to Latvia by both conducting official communication and accepting reports in English, as well as allowing the preparation of reports to be subject to International Financial Reporting Standards.

11 Confidential data provided by an international bank in an interview with the authors of this report.

12 This is advantageous in relation to protectionist regulations, e.g. in the Netherlands, where trust service business directors must be citizens.